This is a letter I have sent to friends who I thought might be interested in the ‘Conflict in the Uplands‘.
Please feel free to copy and paste and send to as many UK citizens as possible before 20th September.

It can’t be all bad can it?
There are three arguments which the shooting lobby fall back on to justify driven grouse shooting.
1. Money and employment in the rural economy.
2. Grouse moors are good for other birds and even use the word biodiversity.
3. Grouse moors are a special habitat.
These might be valid points but, I would argue, need closer scrutiny.
1. The facts brandied around about the money involved and the employment generated are from the grouse lobby themselves and as far as I know there has been no independent research. I have never seen any research done to compare driven grouse shooting moors with other moors which have walked up grouse shooting which is far less intense or with moors which mix walked up shooting with genuine wildlife tourism or the tourism from moors managed purely for wildlife. The grouse lobby likes to think in binary, either-or without examining all the other possible forms of income from eco-tourism. The National Trust who own lots of moorland could set up an experimental moorland to demonstrate other alternatives.
I would like to see how much of the profit goes into the local community or even Scotland. One vicarious liability case could not be prosecuted because the owners were hidden in off-shore businesses. That wouldn’t be for tax purposes would it?
I would also like to know if those so called profits included all the costs to the tax-payer in the form of subsidies and lack of licensing of guns and shooting etc. I would also like to see the hidden costs to the public in the form of increase in carbon emissions from muirburn, increase in flooding, purification of water and the loss of re-introduced raptors and habitats. More important to me is not the monetary loss but the loss to ourselves, to which I can’t find a proper word. Spiritual comes as close as I can think of.
I am also not sure if the employment of gamekeepers, a certain percentage of whom are criminals, is high on my list of human rights priorities.
2. There has been good evidence that grouse moors are beneficial for certain wader species (Golden Plover and Lapwings) but it is by no means all waders. Again the grouse lobby is thinking or rather trying to get the public to think in binary. Their statistics compare keepered grouse moorland with non-keepered moorland. They have not taken into account moorland specially managed for wildlife, including waders, which would be the case on some moorland if shooting was banned. There is nothing to stop a non-grouse moor hiring a keeper. They haven’t taken into account the possibility of new legislation to protect waders. They have not taken into account the fact that Golden Plovers are actually a game bird and are shot. They have not considered all the other ways that waders can be protected. These birds are not exclusive to grouse moorland. Lapwings are mowed down during silage cutting in the valleys below the Forest of Bowland so excuse me, grouse lobby, if I don’t get too upset if a fox takes some on the moorland above.
Personally I would prefer to see Stoats, Foxes, Mountain Hares, Ravens, Hooded Crows and birds of prey flying freely on the uplands even if the population of waders and even Hen Harriers does have to find a new more natural balance rather than a sterile heather monoculture.
When the grouse lobby talk about biodiversity for some reason that does not include any predators and that is surely not going to include Lynx.
3. Grouse moors are not a special habitat. They are special for grouse, yes but this is not a natural habitat by any means. We spent 10 days walking from nut to hut on Hardangervidda, Norway, which was so beautiful it made me realise how brain-washed we are about our so called wilderness, I was ashamed of Scotland. True we did only see one brace of Willow Grouse but this was real nature not grouse farming…. and Norwegians are really very pro hunting.
The beauty of the moors is also used as a pro-shooting argument but since visiting similar habitats in Norway I realized there is very little beautiful or biodiverse about a driven grouse moor. If you look at photos of the patchwork of muirburn you will see what I mean. I have seen some beautiful spots of what appear to be un-burnt heather monoculture. I presume they still exist but I admit I don’t fully understand why some areas are like war zones and some have real charm. One of the places that used to be beautiful is on the north side of The Forest of Bowland but now I see there is a new tarmac road from Roeburndale right across to the west of the Forest of Bowland with car parks in the middle of the moor for shooters visiting the grouse butts. Then of course there are the grouse butts themselves, the new idea of hare-proof fences and ditches. No sorry definite beauty-fail on that one.
Another aspect which needs investigating is a comparison with other countries. The UK is one of the most lax (if not the most) country as regards licensing of hunting. No other country has our level of moorland game-keepering (if they have any at all) or monocultural moor management and our penalties are paltry and here compared with the Spanish deterrent.
All in all, the only thing unique about the UK moorlands is in their level of crime, lack of biodiversity, lack of effective law enforcement and complete mismanagement. Nothing to by proud of. 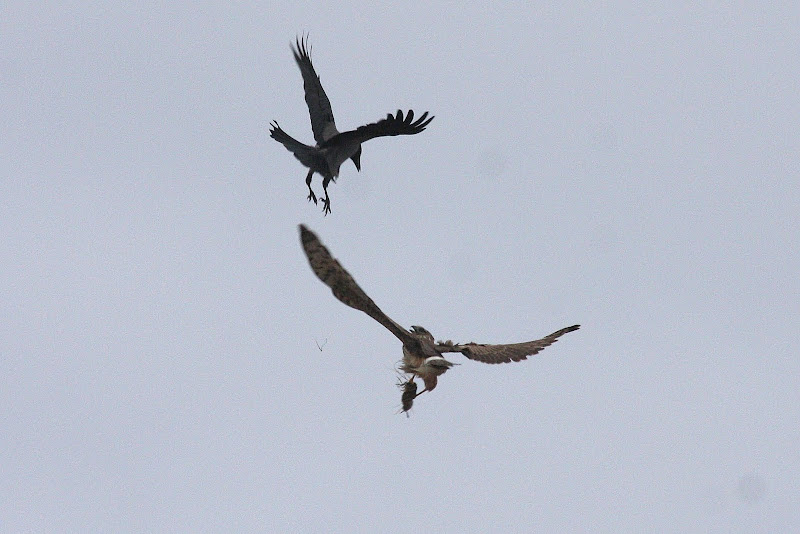 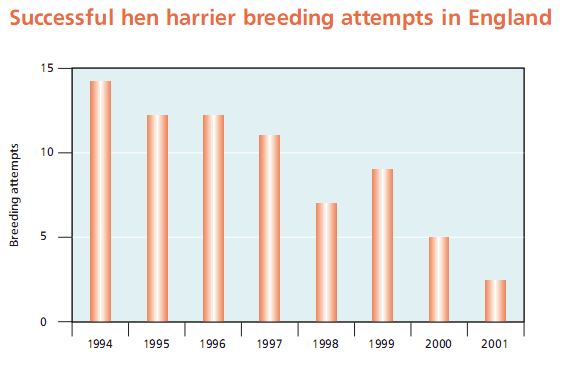 This study proved that ‘On average, 55-74 females were killed each year, 11-15% of the total population of breeding females in Scotland, excluding Orkney’ and that does not include males or immatures. According to this government report the population of Hen Harriers should be about 2,600 pairs, it is actually about 580. Even the grouse lobby in their own paper (Potts 1998) calculate ‘If all potential habitats were occupied, present numbers could more than double, to an estimated 1660 nesting females’.
There is no doubt that is loss is due to persecution and it is not just a few ‘bad apples’ perpetuating these crimes. Here is a list of estates where crimes have occurred.
https://raptorpersecutionscotland.wordpress.com/category/named-estates/
Maps of these crimes can be found on RSPB and PAWS Scottish crime reports.
This situation is the same with Golden Eagles and Peregrines.
This Scottish government SNH study on Golden Eagles states ‘A number of lines of evidence indicated that illegal persecution of eagles, principally associated with grouse moor management in the central and eastern Highlands, is the most severe constraint on Scottish golden eagles….Records of illegal persecution of golden eagles (including poisoning, trapping, shooting) were also more common in those regions where grouse moor management predominated…There was no consistent or strong evidence of associations between territory vacancies and constraints other than persecution in these regions’.
And for the most recent data on Peregrines ‘Illegal persecution continues to restrict numbers and productivity of breeding Peregrines in some regions, particularly where pigeon racing is practiced and where there is intensive management for red grouse shooting‘
and ‘Low occupancy of nesting ranges, with more singletons than pairs, was associated with intensive management for driven grouse shooting.’
and ‘The illegal killing of birds of prey is an important form of wildlife crime, which in the UK, is often associated with land managed for the recreational shooting of red grouse….Population models [of Peregrines] suggested source-sink dynamics, with populations on grouse moors unable to sustain themselves without immigration. Population data confirmed that growth rates were indeed lower on grouse moors than on non-grouse moor sites‘
Unbelievably, although the persecution of birds of prey has been illegal since 1954 and continues, the driven grouse moor owners and managers have found loopholes with which to persecute raptors within the law. So far the law hasn’t caught up with these methods and it is doubtful that they will in the near future given the amount of trust and self-regulation given to the grouse lobby. The only thing that can change this situation is public awareness.
Disturbing or preventing raptors from breeding is illegal. But if gamekeepers can prevent the birds from even attempting to breed it is very difficult to prove. The methods with which the driven grouse moors ‘legally’ persecute raptors includes a staggering array of weaponry.
1. Inflatable screaming and bowing scare-men
2. gas guns
3. delayed fire-crackers
4. What’s next?
If the illegal persecution is not enough there is also the damage to the ecosystem in the form of drainage, burning, lead poisoning, veterinary drugs, flood damage, the ‘self-regulated’ slaughter of mammalian predators and Mountain Hares. These are all subjects which go beyond a single e-mail and with more information daily, more can be found on Raptor Persecution UK, Mark Avery’s blog and the updated edition of Inglorious by Mark Avery.
References:
Potts, G.R., 1998: Global dispersion of nesting hen harriers Circus cyaneus; implications for grouse moors in the UK. Ibis, 1998. 140(1): p. 76-88.

And of course we can also add a huge following of supporters on Twitter and Facebook. Our thanks go to everyone who – like us – wants to see an end to the illegal persecution of this beautiful bird

Just a few hundred years ago the Hen Harrier was a common and widespread bird of prey. Massive changes in land use meant they lost many lowland breeding sites, and they retreated to breed on upland moorland. Relentless persecution by gamekeepers employed on shooting estates followed. Numbers have declined markedly in recent years as intensification of grouse moors has stepped up, and Hen Harriers have been identified as a priority species by the UK Government in terms of combating wildlife crime.
Peer-reviewed research suggests that good habitat remains for Hen Harriers, but there are 962-1285 breeding pairs of Hen Harrier ‘missing’ from Scotland and 322-339 pairs ‘missing’ from England. A 2011 report clearly stated that in England illegal persecution is “such a constraint that the Hen Harrier is threatened with extinction as a breeding species”.
In 2013 – for the first time since records began – no Hen Harriers fledged young in England.
In 2014 just three pairs have bred – all have required 24 hour protection. No-one knows what might happen to their young when they leave the natal areas.
On the 10th of August – when the media’s attention was turning towards grouse moors and the start of the ‘Inglorious 12th’ – we highlighted the scandal of the widespread illegal persecution of Hen Harriers on upland grouse moors and celebrated one of our most iconic birds of prey.
For BAWC, Hen Harrier Day was primarily about raising awareness of wildlife crime – the persecution of a protected bird of prey. We felt then (and still do) that to move on from the current situation, there has to first be a full and clear acknowledgement from the shooting industry that illegal persecution has been widespread and is a limiting factor on Hen Harrier populations. Next there needs to be a commitment from the industry to ensure that all legislation protecting our wildlife is rigorously enforced, and that lawbreakers – current and historic – are reported to the proper authorities immediately.

Posted by Backsbottom Farm at 02:43